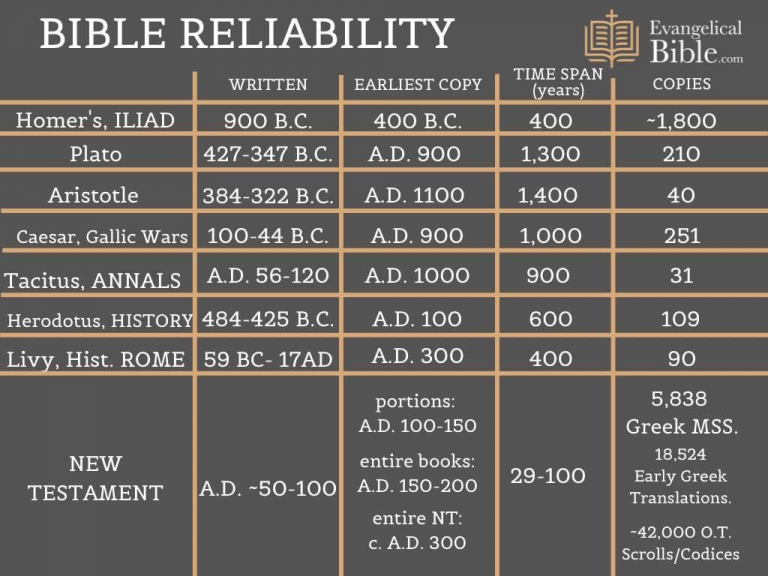 Living in China, my query is how do they know Confucius lived? Did he write anything? No. Did his disciples? Yes, Do we have those documents? No, Do we have any documents within 1000 years. Seems not, yet everyone believes Confucius lived and was a great teacher. He was not actually religious though did appear to believe in a creator God. He was an ethical and governmental teacher.How is the Bible Reliability Comparison with other Religions?

As a History fanatic, I am aware how we historians view history. We think about what motives each writer had. What was their bias? What would cause them to lie and change the history they were writing?

How far were they from the actual events that happened?

Over time, we have to ask would anyone have any motive to falsify or embellish records at a later date?

If we look above, we can guess that there is no high motive to embellish the Iliad. Oh, and who cares if they did?

The New Testament should face more scrutiny, and because of its life changing message, there is lots of evidence. People through out the ages have found life in these pages. They have saved them because the truth is important.

Did Buddha exist? Seems so, but if we compare the wealth of first person knowledge we have of Jesus with conjecture hundreds or years after Buddha died, there is really no comparison. There is virtually no way to know what Buddha’s original thought was. Schools of buddhist thought do not agree and piecing together leaves anyone guessing as they are both biased in different ways. Chinese Buddhism has only about 10% of what they have in Thailand and Tibet as China has changed much.  It is a large jump to believe in Buddha when we are not even sure what he was like.

The Muslims said Mohamed gave the whole Koran verbally during his life.  They say all was set like Mohamed’s position and everyone facing Mecca when he died. Evidence does not back that up. Mohamed also said Jesus did not die on the cross and that is a big problem for Muslims as all historians agree Jesus died under Pilate. They are trying to make that teaching go away now. The Quran is backed up with documents though not many. The Saudi’s say what Mohamed said is better than what is written. Because of the desire to rhyme about every 5th line of the Quran is unintelligible. So translators have a tough time and some make it better.Wikipedia has a good discussion of the good and bad as it were.

Hinduism actually has little discussion about truth of any foundational beliefs they have.

The Atheists have a tall task as it is very hard to prove God does not exist. They keep trying but logically that cannot claim to know. They usually believe in relativism  They have to choose to believe in something that cannot be proven and so tend to be touchy about those who believe in truth. Their faith changes with every scientific discovery. They attack us. Everyone agreed that the Dead Sea Scrolls were complete by 68AD. Now that it appears that someday they will find verified Greek New Testament fragments in the caves, the atheists are starting to say that maybe more was put in in 130AD, No verified fragments have been proven yet though one debatable exists so far.  Atheists also worry about the dump in Egypt that has quite a bit of Biblical Documentary proof and most has not yet been sifted through. Archeology like this helps us year by year while, while Descent of Man from Apes thinking seeks more and more transitional skeletons and uses maybes as facts.

In truth, no one paid much attention to biblical reliability till textual criticism and Darwin showed up in the 1800’s.Also, some rock throwing happened in 1700’s.  Then people started to look more and now there is tons of proof in the historicity of Jesus and the New Testament as we note here.