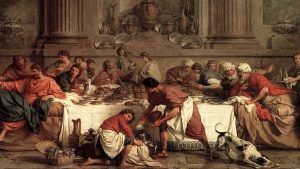 In the 1675, Philip Jacob Spener published Pious Desires (Pia Desideria). He was a Lutheran German pastor who saw that going to church was not changing people’s lives.  He saw that correct doctrine alone leads to dead faith.  I see nothing has changed. So how do we face the Correct Doctrine Dead Faith problem? Philip had some ideas and we can think as well.

At West Point I became best friends with Erin who came from an Orthodox Presbyterian Church (OPC). I was a Lutheran background kid who loved the Bible. At West Point, I started Bible studies and discipled young Christians constantly but had some gaps on the periphery of my theology. Along the way, I learned from his theology at times. He remarked that “OPC might have the best theology, but we do nothing.  Your theology is not as good, but you are doing something.”

Can We Always Be More Active and Less Bookishness?

Philip also found that parsing doctrine does not create lively churches. His fellow pastors saw the same thing and supported him to publish this book and develop what came to be called Pietism. Philip had 6 key points:

(1) to more thoroughly acquaint believers with Scripture by means of private readings and study groups in addition to preaching; (2) to increase the involvement of laity in all functions of the church; (3) to emphasize that believers put into practice their faith and knowledge of God; (4) to approach religious discussions with humility and love, avoiding controversy whenever possible; (5) to ensure that pastors are both well-educated and pious; and (6) to focus preaching on developing faith in ordinary believers.[5] As these proposals indicate, Spener saw positive change for the church as dependent primarily upon the pious involvement of individual believers.[6]

In pietism, genuine holiness is more important than following formal theology and church order. The Bible is the constant and unfailing guide to living one’s faith. Believers are encouraged to get involved in small groups and pursue personal devotions as a means of growth and a way to combat impersonal intellectualism.

Besides developing a personal experience of faith, pietists emphasize concern for helping the needy and demonstrating the love of Christ to people of the world.

Intellectualism will not save a dying world. The love of Christ will. Jesus did not emphasize formalism and was welcome at parties. He was accused of gluttony and used a group of twelve and a closer group of three to change the world.  We get lost in form and closed theology.

Do We Tend Toward Correct Doctrine Dead Faith?

I attended a vineyard like church during graduate school in Philadelphia (1994). They were a messy church and growing fast. The nearby highly respectable reformed church had immorality in the leadership leading to church break. The messy group wrote their own music and had powerful music. They gradually became more interested in right theology and lost their strength and dynamism.

I have started and led small groups wherever I have been and found they can have a strength that we should not leave out. Let’s leave room for heart and messy faith. I tend toward the intellectual side, oh no. We serve a living father whose Son was never a stick-in-the-mud. God made the world with amazing life and color. May we seek life in this God who is truly alive and not get caught in the details of intellectualism.

Any group we begin has its place in our time and area. Over time every group loses its life and needs rebirth. Our life in Christ is to do something with what God gave us to help as many as we can in this time we call earthly life.