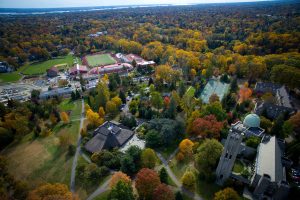 Plato shared an illustration that Socrates shared. In it, people are all pinned to a wall in a cave and cannot look to right or left. Shadows of real things can be seen on the wall they look at but nothing real. One person gets out of the cave and the light hurts his eyes and after a long time of struggle, he can experience life outside the cave, and it is amazing. The limits of education can be seen in the story humanist schools teach.

Secular colleges have dug up this old story to talk about people coming into the light of intellectual reason. They want to say that they are the light. Actually, a school has a place but not so exalted.

Jesus Is Not a Class We Take

Jesus tells better and more important stories.  He tells of a beggar and rich man and both die and the rich man in hell asks Abraham to send the poor man in heaven to tell his brothers, so they do not end up in hell either. Abraham says it is no use as even if someone rises from death, they will not believe.

He further tells the story of believers being a light on a hill and not lighting a lap and putting it under a bowl. He finally tells all of us to go and tell the good news to the whole world.

Jesus tells the story of the rich man to show how hard it is for people to believe and also to help stubborn people to think more.

However, He gives hope that we can spread the good news and gives us the Holy Spirit in power to help us. He tells many stories of what is the kingdom of heaven like to help them see the light as it were.

So, I feel the humanists are in a limited world. They have to talk about Socrates and the cave instead of being a light on a hill. Socrates fought against all the superstitions, and got killed as the people wanted their superstitions. Some humanists like to think we Christians are those superstitious people, so humanists are friends with Socrates. In fact, we are more the truth and the light.

They often do not know that Jesus can transform a life in bigger ways than college. He is the answer to the question of the way, the truth, and the life. He is the big light while education is the small light.

The Limits of Education-The Hope of the Gospel

Christian Colleges and Christian grade schools trying to get people to accept the light of the gospel find it hard. Faith is not a class we take and pass. Faith is the pearl of great price. Jesus used stories and illustrations again and again to help people to surrender to the gospel. He knew teaching the facts of his deity and mission and faith would not be best to get people saved. The facts alone cannot save us.

We need the gift of faith and many people who know the gospel more clearly than us do not believe.

So schools are great, and they can pretty successfully educate people to become intellectuals who can talk facts. They do not educate faith. Education has limits, and faith is indeed a gift.