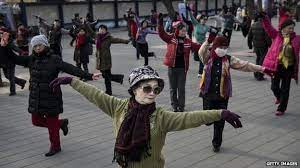 In early morning I went running in my new neighborhood along a Yangzte river delta stream in our City in Wuxi, China. I noticed that not many people were out, but other runners were out. 80% were men running alone like me and 10% were couples out walking together and 10% were women running alone. Here I see again that by creation design women and men are so different.

In the evenings in China women gather to do line dancing in China. Men occasionally join but tend to be in the periphery and less than 10%.

Both genders are exercising. Totally more active women than men outside. I have not checked health clubs.

Women have more concerns about security, so run alone less, but something more is here.

Women join a lot of traditionally male dominated sports in this era. Not all women are joining wrestling and American Football clubs, but some women joined. In the Army women are now in the combat arms. Not all women. Not all men either actually.

Now the Taliban forbid women in the public sphere and think they should have less education. In Bible times women had no legal standing and were not heard from, but Paul co-worked with them. Think Priscila and Aquila and Claudia.  Also, Paul lists Euodia and Syntyche. There are likley mpre but you get my point. Im an era when women were less in the public square, we can see they had a lot in the church.

Paul also says women should not speak in the church. In Acts 21 Paul stays with Philip:

8 Leaving the next day, we reached Caesarea and stayed at the house of Philip the evangelist, one of the Seven. 9 He had four unmarried daughters who prophesied.

Merriam is listed as a prophet in Exodus.Actually many are.

How can women be prophets and not speak in the church? We need to think more what Paul meant in not letting woman have a voice in Church or anywhere. Everywhere else he accepted them as prophets and co-workers. See also Men and Women Created Different.

Women, being different than men, have much to say that we all need to hear. Men need to be much more then we are. Look at all the Bible says. Lets us not limit the women in speaking in the church as the prohibition is clearly not for all times and places. Let’s expect more of us men. Men can be as tender as Jesus and as tough. God the Father is more tender and more tough than any man. Us men need to get going.