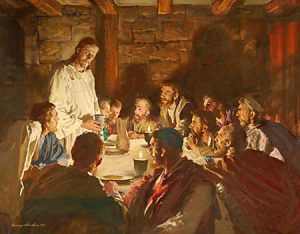 Jesus instituted Communion on the night before he died. He is talking about the main thing as His death is the fulcrum point of all history.

Let us here list what he said beginning with Mark,

22 While they were eating, Jesus took bread, and when he had given thanks, he broke it and gave it to his disciples, saying, “Take it; this is my body.”

23 Then he took a cup, and when he had given thanks, he gave it to them, and they all drank from it.

24 “This is my blood of the[c] covenant, which is poured out for many,” he said to them. 25 “Truly I tell you, I will not drink again from the fruit of the vine until that day when I drink it new in the kingdom of God.”

26 When they had sung a hymn, they went out to the Mount of Olives

Then let’s look at Luke:

17 After taking the cup, he gave thanks and said, “Take this and divide it among you. 18 For I tell you I will not drink again from the fruit of the vine until the kingdom of God comes.”

19 And he took bread, gave thanks and broke it, and gave it to them, saying, “This is my body given for you; do this in remembrance of me.”

20 In the same way, after the supper he took the cup, saying, “This cup is the new covenant in my blood, which is poured out for you.

Then see the other slight difference in Matthew:

26 While they were eating, Jesus took bread, and when he had given thanks, he broke it and gave it to his disciples, saying, “Take and eat; this is my body.”

27 Then he took a cup, and when he had given thanks, he gave it to them, saying, “Drink from it, all of you. 28 This is my blood of the[b] covenant, which is poured out for many for the forgiveness of sins. 29

Paul did not change anything, but sought to regulate it some.  Let’s see what Paul says in the last mention of communion in Bible:

20 So then, when you come together, it is not the Lord’s Supper you eat, 21 for when you are eating, some of you go ahead with your own private suppers. As a result, one person remains hungry and another gets drunk. 22 Don’t you have homes to eat and drink in? Or do you despise the church of God by humiliating those who have nothing? What shall I say to you? Shall I praise you? Certainly not in this matter!

23 For I received from the Lord what I also passed on to you: The Lord Jesus, on the night he was betrayed, took bread, 24 and when he had given thanks, he broke it and said, “This is my body, which is for you; do this in remembrance of me.” 25 In the same way, after supper he took the cup, saying, “This cup is the new covenant in my blood; do this, whenever you drink it, in remembrance of me.” 26 For whenever you eat this bread and drink this cup, you proclaim the Lord’s death until he comes.

Now See How Paul Protects Us

27 So then, whoever eats the bread or drinks the cup of the Lord in an unworthy manner will be guilty of sinning against the body and blood of the Lord. 28 Everyone ought to examine themselves before they eat of the bread and drink from the cup. 29 For those who eat and drink without discerning the body of Christ eat and drink judgment on themselves.

30 That is why many among you are weak and sick, and a number of you have fallen asleep. 31 But if we were more discerning with regard to ourselves, we would not come under such judgment. 32 Nevertheless, when we are judged in this way by the Lord, we are being disciplined so that we will not be finally condemned with the world.

33 So then, my brothers and sisters, when you gather to eat, you should all eat together. 34 Anyone who is hungry should eat something at home, so that when you meet together it may not result in judgment.

Mark records very simply and no vision to repeat, though seeing this we all might want to repeat.

In Luke, Jesus notes we should do this to remember Him.

Think how little Jesus says here. Jesus does not say anything about who should do this or how often or even what food or drink to have.

Notably, Jesus used bread with no yeast at this Passover meal. They used wine. Our Lord does not want the meaning in this event to be what the food or drink is. The meaning is that Jesus death is the main thing.

Given that Jesus gives almost no structure to Communion, we should not be suprised to see early Christians did some over the top practices.

Paul cleans this up by saying this is not about everyone bringing a meal. Can you see that Paul is narrowing in to focus on the meaning?

Paul does say that we should not take communion if we cannot discern this is about Jesus giving his body to save us. If no meaning, then do not do it. One should not play with somethng so life changingly important.

It is About the Meaning Not the Rules

It says nothing about church leaders deciding who gets to have communion. Paul says you hurt your self if you casually or without meaning take Communion. I see Paul is recommending you do not hurt your self by taking Communion when your heart is not to remember Jesus death.

The Apostle does not even touch on prohibiting anyone. Communion is an invitation to enter into what Jesus death is.  It does not say only ‘good’ people can get communion.

Jesus and Paul also do not decide who gets to initiate Communion. Our Lord offers total freedom. I am totally ready if my son or daughter at dinner asks us to eat our taco in remembrance of Jesus death, and then gives us water that we can accept the new life/covenent Jesus wants to give us through His death.

Jesus and Paul are clearly talking about meaning amd caring for others. That taco and water could do that.

Jesus did not create any other ceremonies.  However, this event is too important.  Jesus, while facing death on the cross, pauses to give us this gift. We cannot do enough to make the main thing the main thing and Jesus certainly does not want to limit efffortd to remember His death. Jesus instituted Communion just the way he wanted and we should not add or subtract from his message.

Let’s hear Him and know that we must find more and more ways to come back to the main thing. Jesus wants to keep us near the Cross. Here is one help He gives us.