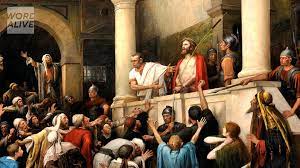 Pilate asked a good question, What is Truth? Unfortunately, it appears he did not believe Jesus had the best answer. Jesus has said that He is the Truth.  Amen. But, we as Christians need to further treasure truth in all its forms. Pilate was confused because he knew that liars confuse the facts and make truth hard to find. How should we know the truth and not be deceived?

Jesus came to bring us the truth. However, people muddle Jesus message and make it hard to find his truth. Salesmen lie about their products and try to keep us from finding out. Under pressure, I think we have all lied at some point in our lives. So, lies are all around.  Jesus identifies with truth so much that he says he is truth. He calls Satan the father of lies.

How Do We Know What is the Truth?

So, let’s think about how to get the truth. It is a legal question actually, and we need to know as Jesus does what is the proper judgement of truth.

How do we know the actuality of what should be in the Bible?

The New Testament was written in the 1st century AD. We do not have the Greek original copies. There are thousands of copies. Which do we choose?

We choose the one that is nearest to the date of the originals. We have a few verses of the gospel of John from about 125-150 AD. That is less than a hundred-year gap. Amazing. So, it is easy to decide, but we may change the words if we find out that some yet older copy has some likely more original words.

As we see, we need to follow some process to find the best truth even in this.

How do we know if the preacher said something right? We check his words against the Bible.

How do we know if our kids tell what really happened? We all know that we can check or ask others who can verify. We believe those who have no motive to lie.

In baseball, we do not ask either coach as they have motive to lie. We ask the umpire as he is paid to tell the actual thing he saw.

When I moved to China, the Rodney King verdict in 1992 led to a huge riot in Los Angeles.  We could get Voice of America news on our short wave radio. That is a US goverment run station.  In this case, I felt more comfortable listening to the BBC, as they had less motive to lie since the story was about America and not about the UK.

Naturally, listening to anything, I should try to listen to both sides of a story to find the truth. Sometimes, I think we are too lazy to do this.

Many times the truth is somewhere between what two opposing liars have said.

The News Lies or At Least Has a Bias

My father taught me that newspapers lie. So I need to know each newspaper’s motive to lie. Chinese newspapers write what the government wants. That is their bias.  No newspaper is unbiased.

American newspapers lie to make their readers happy, so they can make more money. People want real news, so they give real news with bias that makes readers happy.

Therefore, to get the truth in the news, I need to look at opposing biases in the media and know the truth is somewhere between the two biased reports. Further, I could find a neutral data based report between the two that are biased in some cases.   I should not just accept the one that makes me feel the best. Jesus does not always make us comfortable for example.  The truth can make us very uncomfortable, but it will help us if we receive truth and not the lie. Jesus has no part in the lie. Also read The Cross.