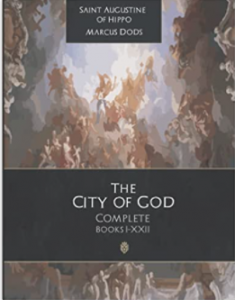 Can we admit our life is out of control and God is Not?  A full two years into the first pandemic in 100 years the world is not too well. What I mean is that emotional health is not well, and I think that impinges on our relationship with God and each other. Polarization is also mostly out of our control. That does not even touch our family problems.

How can we be smiling when so many loved ones have been sick or even died to this disease? In the process politics became more important than brotherly love. This also can disturb us greatly. Living with both for so long is so hard. Then we live in this world.

In 410AD, Rome got sacked, but other parts of the Empire were still OK. The Christians had gained political power starting with conversion of Emperor Constantine in 312.  Then Emperor Theodosis I outlawed all other religions in 380’s. Just thirty years later, the Goths sacked Rome.

So the pagans criticized the Christians and said it was our fault. Convents of nuns were raped in Rome. Some women committed suicide to avoid this and some became war prizes of barbarian conquerors of the city.

Christians queried God as to why this had happened.

Out Of Control and God still in Charge- Hurray!

Augustine living far from Rome spent many years writing a classic defense of the Christian faith answering every criticism and doubt.

The book is called, City of God. I slogged through 400 of its 800 pages and then had to put it down. It is a little long winded and has very long paragraphs for the modern mind.

He, above all, notes that we centrally belong to the kingdom of God and these political problems like being taken captive by barbarians are not the main thing. Oh My! He advises these women to settle down and find their way in their new family.

There is really a lot that is out of our control that we are having a hard time bearing.

However, we have nothing to compare to the women being captured in Rome and then remaking their lives in Christ under dramatically different management.

Augustine says to all of us that we belong to the City of God foremost, and the city of man will definitely fall, and it is ok. Let us all take a deep breath.

See what Paul the Apostle says,

We are hard pressed on every side, but not crushed; perplexed, but not in despair; 9 persecuted, but not abandoned; struck down, but not destroyed. 10 We always carry around in our body the death of Jesus, so that the life of Jesus may also be revealed in our body. 11

Something bigger is right in our lives. God is still in charge and bigger than all our sorrows and failures. Let’s not get over politicized or over burdened with the pandemic.  Let’s, through God, be thankful in all circumstances including during COVID-19 and polarization.  Let’s care more for the people around us and understand their stresses in this not easy time.  Further, we can prayer journal and see light too. We can get to the other side with God.