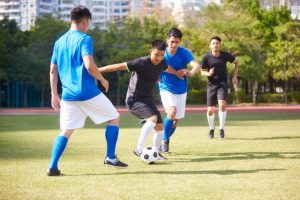 Men in America are not doing well. For a long time now many more girls graduate from college then boys. Colleges commonly are 56% girls and 44% boys for example. Also, the 44% boy population usually cannot match the girls in success in college or life. Men fill the prisons and not women.  Let’s think on this more via secular survey results. This survey was a response to the #MeToo movement.

I think the #MeToo movement is healthy in bringing a problem into the light. Unfortunately, it made many men feel dirty without making us much better. Here is a quote from the 2018 survey.

Sixty percent of men agreed that society puts pressure on men in a way that is unhealthy or bad. And the younger a man was, the more likely he was to believe that.

Men feel society pressures them to be touchy feely and did not like that, or society asked them to be macho in unnatural ways to be a man.

Guys Have Their Way of Thinking

The survey also noted what guys are worrying about almost every day. The surveyors are not Christian, but they clearly surveyed many Christians as part of the survey. Surveys reflect averages and not specifics on people.

As a recruiter, I see that guys are about this provider issue. Women will often take a job that lets them still take care of their family. Men often will disdain such work and find a job that will make more money or give them a better career. As much as I am a family focused Christian man, I feel this survey. However, I would definitely have said I think about God every day.  So, I would add that as was discouraged that down to 6% there was no listing for anyone saying God.  We Christians push God out a lot, I think.

Nearly half of men say they are lonely. Many men lack the ability to emotionally connect with those around them and end up lonely.

32% of men think often about their mental heath. It is not un-Christian to get psychological help. No trained counselor is going to attack your faith. The Bible has no prohibition on getting help for our bodies or our minds.    It shows proper humility when we say we need help. God just smiles as knows we need help.

The survey ended with an insightful quote.

In all, the survey suggests that American men are still fractured about their role in society. A year’s worth of headlines about sexual misconduct has led many to declare that a “reckoning” is upon us. But a reckoning does not necessarily make for a revolution.

A lot of guys know that things are not all well, but that does not mean they are ready to change or even know what to do in this new culture. Men need a lot of support and ultimately wise direction to climb out of the mirk and be men who list family and God high.  God gives us faith hope and love. May us men stand up and be more than providers. Our families and the wider culture need us to be salt and light. Surely, God is calling us to be there.